What is Equine Footing Science?

The J.D. Wheat Veterinary Orthopedic Research Laboratory team—directed by Dr. Susan Stover, a professor in the School of Veterinary Medicine—conducts research on footing to improve equine health and injury prevention. Initially focusing on racing safety for racehorses and jockeys, the team also studies arena surface footings for other equine disciplines, such as dressage and jumping.

•    the magnitude of speed or difficulty of the activity – which affects the “magnitude of the loads” imposed on bones, tendons, and ligaments

To understand these concepts, think of a stick which can be broken with a single, large bending load or force. If it doesn’t break with a single bending load, many smaller loads could be applied which will eventually break the stick. This process causes small cracks to form in the stick which gradually cause the entire stick to break. The larger the load applied, the greater the cracks with each load, and the fewer the number of loads required to break the stick. For horses, the magnitude of the load is proportional to the speed of the horse or the difficulty of the activity (e.g. jumping) and the characteristics of the surface on which the horse works. The number of loads is equivalent to the number of strides, or distance, the horse moves or number of activities (e.g. jumps).

Bones are similar to the stick, suffering small cracks with the physical stresses of repetitive use. Fortunately, horses are living creatures and bone has living cells that continually repair the damage throughout life if given the time to do so.

To understand the factors causing bone damage, consider the fetlock, a common site of injury. The fetlock provides weight bearing and support during locomotion by several important structures on the back of the leg. These structures are frequently injured in equine athletes because of repetitive fetlock extension during limb loading. Fetlock support structures include the:

The tendons and ligament are affected by factors that affect the magnitude of limb loading. The first is simply speed or activity of the horse. With greater speed, the fetlock extends further and puts greater strain on the fetlock supporting structures. Although speed is something unlikely to be reduced in performance horses seeking to maintain competitiveness, the number of loading events can be reduced within a specific time period. Loading events include the exercise distance, or number of training days the horse is asked to do at a certain speed or activity within a period of time or stage of training. In other words, injuries can develop from too intense training. 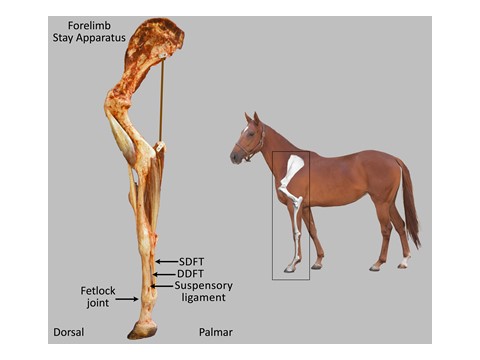 Limb loading is also affected by the surface on which the horse performs. Harder, stiffer surfaces impart greater forces (ground reaction forces, or GRFs) on the hoof, which propagate up the limb causing greater fetlock extension and greater forces and strains in the supporting tendons and ligaments. Different surfaces (dirt, synthetic, turf) are known to affect the risk for racehorse injuries:

The surface must: be firm enough to support the horse, while providing cushion with a low enough stiffness to dampen the load; be responsive to return energy to the horse in an effortless manner; provide enough grip to allow some slide and prevent jarring with hoof contact but support the hoof during propulsion; be uniform to provide a consistent experience with each stride.

Surface characteristics (firmness, cushion, responsiveness, grip, consistency) are affected by material composition (dirt, synthetic, turf), structure (layers of the surface), and maintenance of the materials and structure. Most materials used in track surfaces can be made and maintained to be safer or riskier surfaces.

Fetlock extension is measured on different surfaces in research studies. The degree of fetlock extension is indicative of the magnitude of loads and strains in the fetlock supporting structures, which then reflects the risk for injuries to the fetlock and supporting structures in equine athletes. This slow motion video reveals the extent of fetlock drop that occurs when a dressage horse extends its trot on this particular surface. Research is underway to identify the properties of arena surfaces that optimize health and performance, and to create a standardized system to measure and replicate those conditions. Research results show that GRFs were higher on the dirt and turf surfaces than on the synthetic surface. Although these findings cannot be generalized to different dirt, turf, and synthetic surfaces which might be made of different materials with different surface structures and different maintenance techniques, it does demonstrate that surfaces of greater stiffness will impart greater GRFs to the limb which will result in greater fetlock extension and greater risk for injury with enough load cycles. 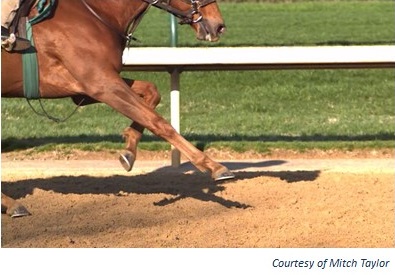 The ultimate goal of the team’s research is aimed at determining the mechanical characteristics of surfaces that will minimize the risk for injury while optimizing horse performance. With this information, arena and track surfaces of different materials can be designed and managed, for example in different climatic conditions, to behave in a consistent manner – wherever horses go to train and compete.

While initial studies focused on the impacts of various training, competition and environmental factors on racehorses, the basic principles and findings translate to equine athletes engaged in other performance sports and activities. Currently, research is ongoing studying the effects of arena footing on dressage and jumping horses.

“At the UC Davis School of Veterinary Medicine, the bottom line is improving the health of equine athletes,” said Stover. “That is accomplished through an understanding of the impact of the factors that can be controlled and managed, like footing properties and training/competition schedules to prevent injuries in performance horses.” 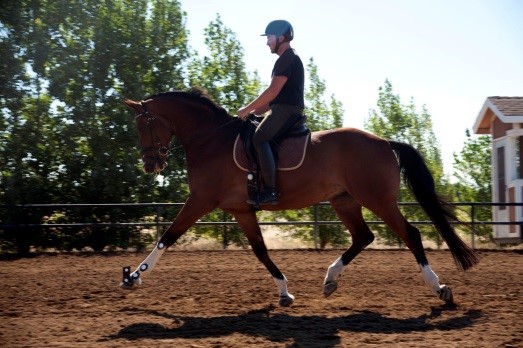