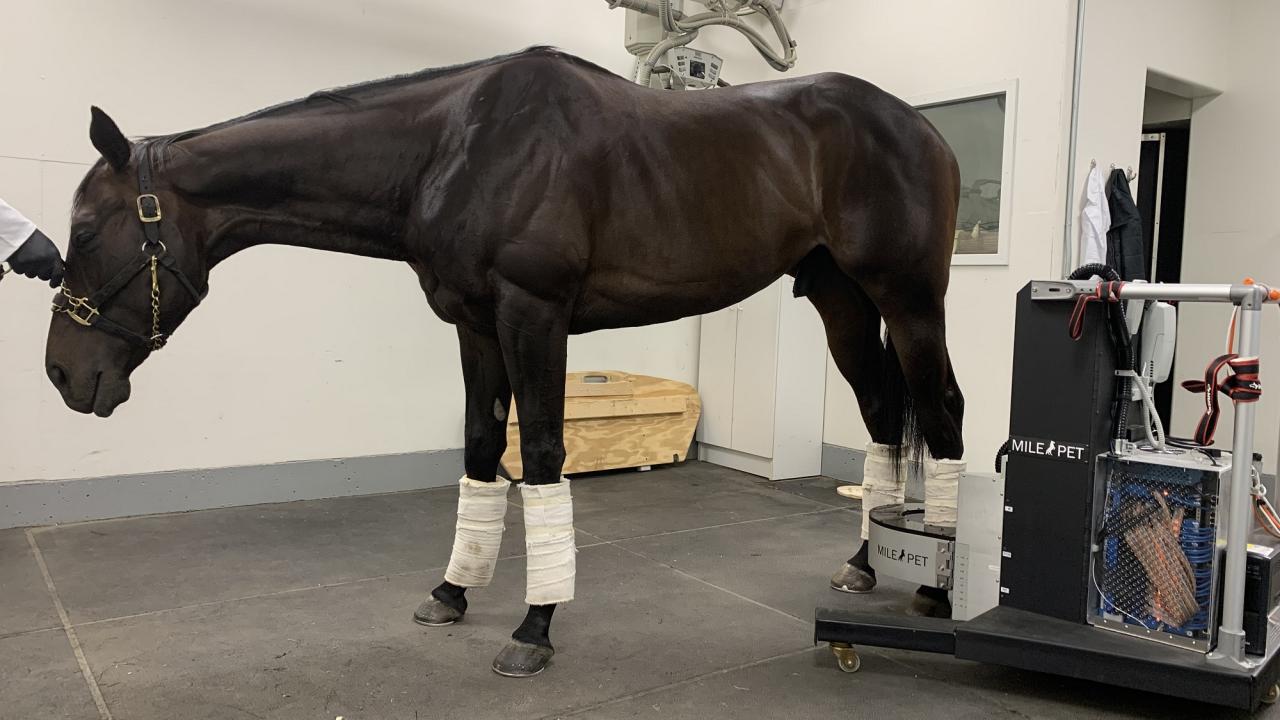 The UC Davis standing equine positron emission tomography (PET) scanner is officially in use at Golden Gate Fields racetrack in Berkeley, CA, providing imaging at the molecular level to monitor racehorse health and guide training and medical care. The scanner (the MILEPET from LONGMILE Veterinary Imaging) allows for imaging of a horse’s leg while under mild sedation, eliminating the time, cost, and health risks associated with general anesthesia. In use at the UC Davis veterinary hospital since March, the instrument has been transported by a team of UC Davis veterinarians and technicians to the equine hospital at Golden Gate Fields once a week for the past month.

Dr. Mathieu Spriet, the equine radiologist who pioneered equine PET, is very enthusiastic about this new development. “Running the PET scanner at Golden Gate Fields brings multiple benefits,” said Spriet. “First, it provides Northern California horseracing with the same technology that has helped improve racehorse health and safety in Southern California. Second, it demonstrates that the equine PET scanner can be efficiently transported and shared between multiple sites, reducing costs and increasing availability. And finally, it opens the door to more research opportunities with performing multicenter studies.”

This achievement was made possible thanks to support from the UC Davis Center for Equine Health and the Stronach Group, owners of the Golden Gate Fields racetrack. Both parties have been intimately involved with the development of equine PET. The Center for Equine Health was at the origin of the very first equine PET scan performed in Davis in 2015 and has since supported the development of the modality by funding several research projects as well as a clinical program. The Stronach Group has had a key role in the last two years by providing partial support to develop the first scanner allowing imaging of standing horses in an effort to prevent catastrophic breakdown in racehorses.

The original MILEPET, owned by the Southern California Equine Foundation with support from the Stronach Group, has been in use at Santa Anita Park since December 2019. In a year and a half, over 200 horses have been imaged with the scanner, several on multiple occasions. Research projects supported by the Grayson Jockey Club and the Dolly Green Research Foundations have helped characterize the value of PET scanning in racehorses. The PET scanner is ideal for imaging the fetlock (the horse’s ankle), which is the most common site for catastrophic injuries in racehorses. The first research study performed at Santa Anita demonstrated that PET was far superior to bone scan, another imaging technique in use at the racetrack, for identifying injuries in the sesamoid bones (the small bones at the back of the ankle). Two subsequent studies demonstrated the value of PET to monitor injuries while healing and joint health as horses go back into training.

The use of PET at Santa Anita, in combination with the use of MRI and medication rule changes, is one of several factors that have led to a marked decrease in the number of fatalities between 2019 and 2020. Based on this success, the Stronach Group was eager to offer the same technology at Golden Gate Fields. The proximity to UC Davis offered a unique opportunity to utilize the scanner at both sites. It is currently available at the UC Davis veterinary hospital four days a week and one day a week at Golden Gate Fields. The relative small size (4 x 5 feet, 300 lbs) and mobility of the scanner make it possible to load in a trailer, drive the hour from Davis to Berkeley, and start scanning about 30 minutes after arriving at the racetrack.

To date, 36 horses have been scanned in the first six weeks of operation at Golden Gate Fields. All scans are performed by a UC Davis team led by Dr. Mathieu Spriet and a Golden Gate Fields team, led by Dr. Casille Batten, veterinarian for the Stronach Group. All four fetlocks of a horse can be imaged in 15 to 30 minutes. A new barn was built at the Golden Gate Fields equine hospital specifically for the PET horses, making it possible to scan six horses in one imaging session. Up to 12 horses can be imaged in one day. Two projects, one evaluating horses with injuries and the other assessing horses with no signs of injuries, are ongoing with the support of the Oak Tree and Dolly Green Research Foundations. Both studies aim at comparing findings from horses imaged at Golden Gate Fields with those imaged at Santa Anita. As the two sites use different types of race surfaces, (i.e. synthetic at Golden Gate Fields and dirt at Santa Anita), these studies will help document and compare the effect of the different surfaces on the horses’ bones.

The advancement of PET scan imaging and research will play an important role in the future Veterinary Medical Center (VMC) at UC Davis. Advanced imaging for horses in the new All Species Imaging Center will be fundamental to patient care in the new Equine Performance Center. Our equine patients will benefit from the center’s ability to open new avenues to improved performance through the application of clinical research. 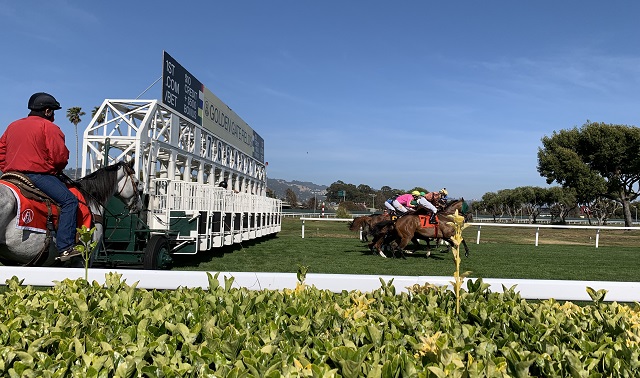