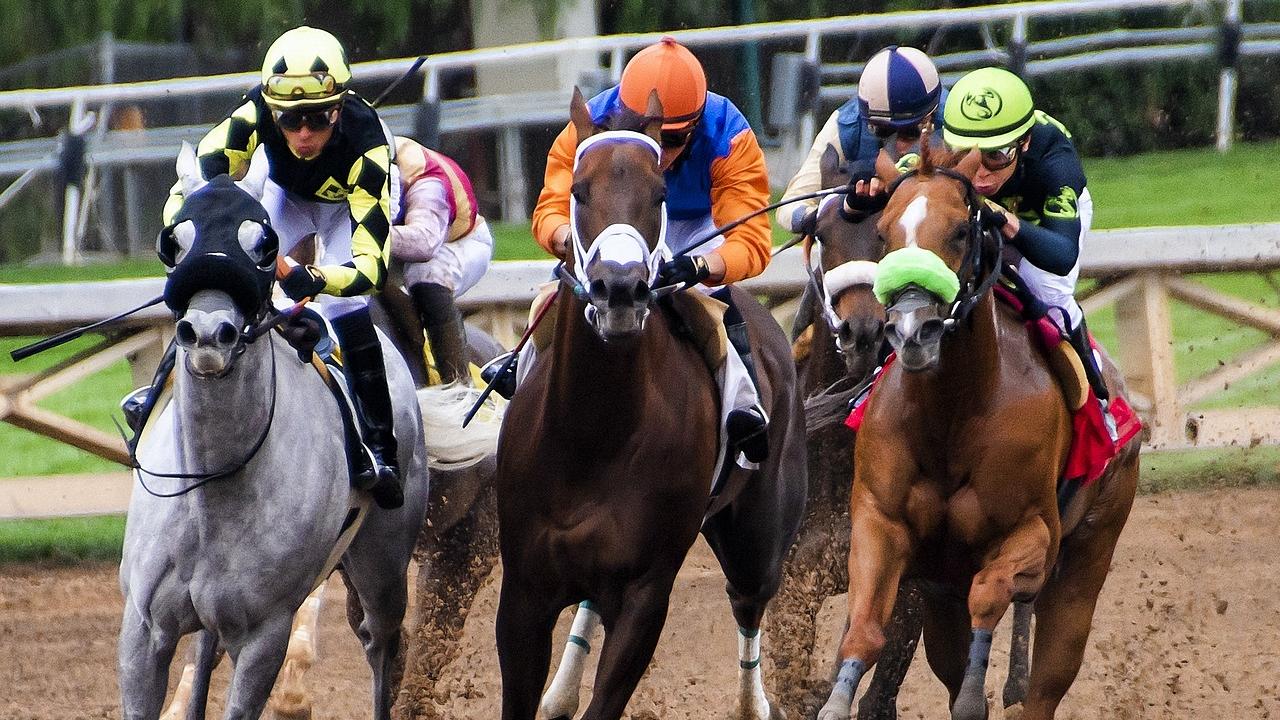 The study, led by Drs. Carrie Finno and Gary Magdesian,  which was reported in the journal PLoS Genetics. Genetic testing can now be performed at the UC Davis Veterinary Genetics Laboratory to identify horses with the variant and avoid mating carriers that could produce affected foals.

“For Thoroughbred owners and breeders, the loss of a foal has tremendous economic and emotional impacts,” says first author Victor Rivas, who conducted the project as part of his undergraduate training in  Finno’s laboratory. “It is important to promote safe and strategic breeding habits by actively breeding horses genetically screened not only for EFIH, but for other diseases that may impact quality of life.”

Foals affected with EFIH suffer from low blood calcium concentrations, resulting in involuntary muscle contractions, muscle stiffness that leads to a stiff gait and can progress to an inability to stand, seizures, fevers, and an abnormally fast pulse. Parathyroid hormone is typically produced to increase calcium levels in the body, but in these foals, concentrations are low or “inappropriately” normal (i.e. they should be high due to the low calcium). Affected foals die or are euthanized due to poor prognosis. Necropsy results reveal underdeveloped or absent parathyroid glands.

Previously termed idiopathic hypocalcemia, EFIH has been observed in Thoroughbred foals up to 35 days of age. Disease onset and progression are likely determined by the amount of calcium in the diet early in life. This can vary based on dam milk calcium concentration and the amount of milk ingested.

The current study determined an autosomal recessive mode of inheritance and performed whole genome sequencing of two affected foals. A mutation in the rap guanine nucleotide exchange factor 5 (RAPGEF5) gene was present in two copies (homozygous) in both foals. The variant was further analyzed in a frog developmental model and demonstrated loss-of-function of the RAPGEF5 protein leading to aberrant development. Based on this data, the researchers hypothesize that RAPGEF5 may play a role in the derivation of the parathyroid gland during development.

“The next steps are to assess the allele frequency in a large population of randomly selected Thoroughbreds,” says Finno. “Additionally, we have discussed collaborating with Dr. Nathan Slovis at Hagyard Equine Medical Institute in Kentucky to test for the variant in cases of ‘sudden death’ in Thoroughbred foals.”

The clinical presentation of EFIH is similar to human familial hypoparathyroidism. Since the RAPGEF5 gene is highly conserved across species, it is a potential new candidate gene for primary hypoparathyroidism in humans.

“This type of research discovery requires a unique collaboration between clinicians, pathologists and basic researchers,” says Finno. “We were incredibly fortunate to have samples submitted from Drs.  Slovis, Daniella Leuthy (University of Pennsylvania) and Laura Javsicas (Rhinebeck Equine) and the expertise of Drs. Brian Caserto (VetPath services) and Andrew Miller (Cornell University). Additionally, the ’proof’ of functional results of this genetic mutation would not have been possible without our collaborator from Yale University, Dr. Mustafa Khohka.”

Support for this study was provided by the UC Davis Center for Equine Health. 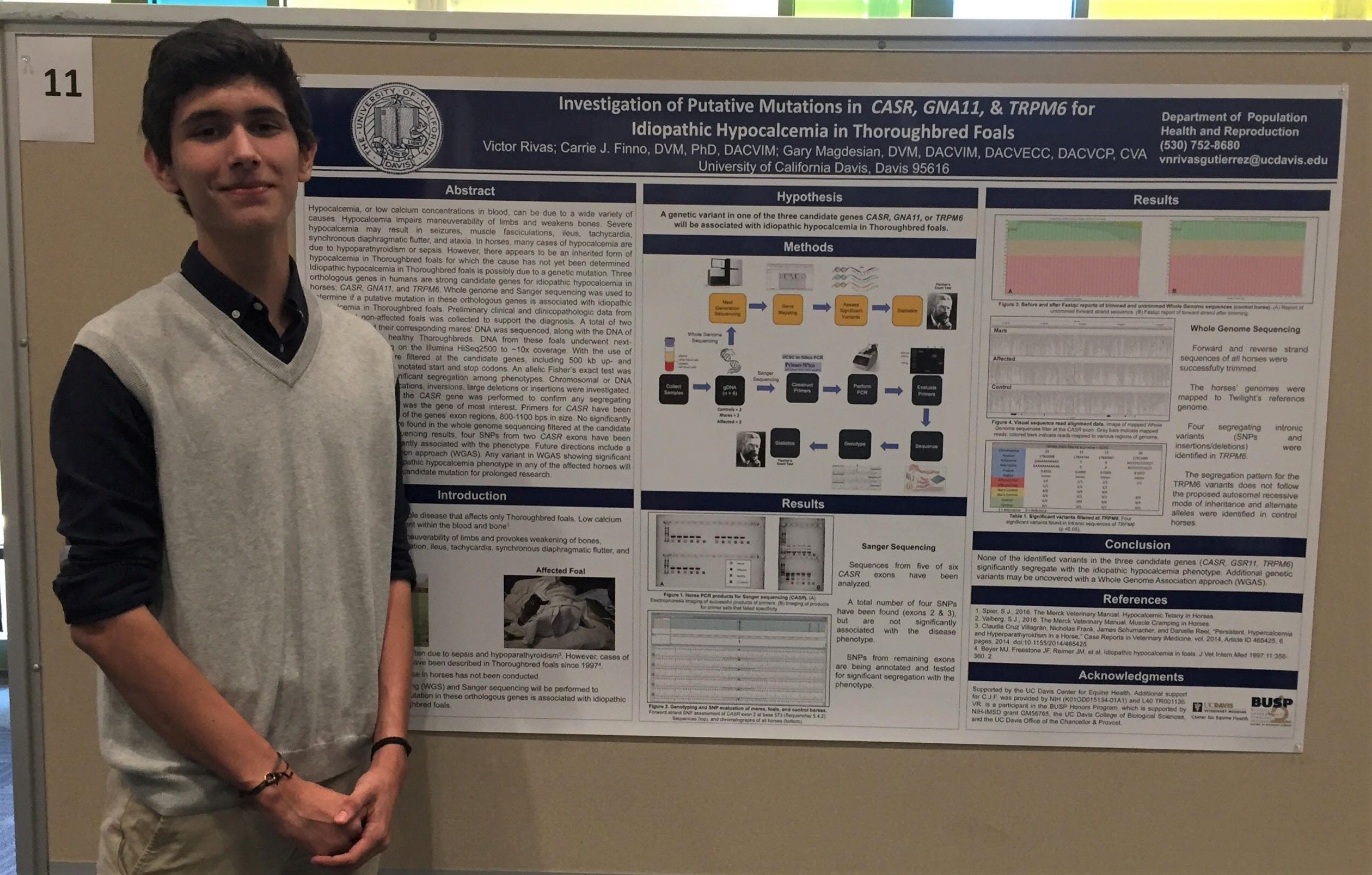 First author Victor Rivas performed this research while pursuing his undergraduate degree. After graduating in 2019, he enrolled as a PhD student at UC Davis in the Integrative Genetics and Genomics Graduate Group where he now conducts research in Dr. Joshua Stern's cardiac veterinary genetics lab.

I am Nicaraguan born; I come from a small city called Jinotepe, Carazo. This is where I culminated my high school degree. I pursued an Animal Biology degree at UC Davis given the university’s renowned reputation for having the best program in my field of interest.

2)      What inspired you to become an Animal Biology major?

I was spoiled in that my parents allowed me to own a great number of animals (dogs, cats, amphibians, fish, rodents, and reptiles). My desire to become an Animal Biology major came from my love of dolphins. I used to live in Miami, and, as you can imagine, dolphins were quite common. At the time, I thought I was going to become a marine biologist, until I realized I could learn about all sorts of animals, not just those confined to bodies of water.

After finishing my PhD, I am determined to continue my studies and obtain a DVM degree. I also plan to complete a postdoc or residency program to join academia as an instructor as well as conducting my own translational research purposed for discovering novel mutations for idiopathic diseases in animals.

4)      Do you have any advice for undergraduates about becoming involved in research during college?

I encourage all students who have the thought of conducting research to try it. It doesn't even have to be as serious as joining a lab, but could involve volunteering in quarterly research opportunities. Each research field is different; therefore, I also recommend talking with peer advisors or professors with regard to the ongoing research that is happening at UC Davis. This will help students refine their research interests and join a lab where they are genuinely happy.