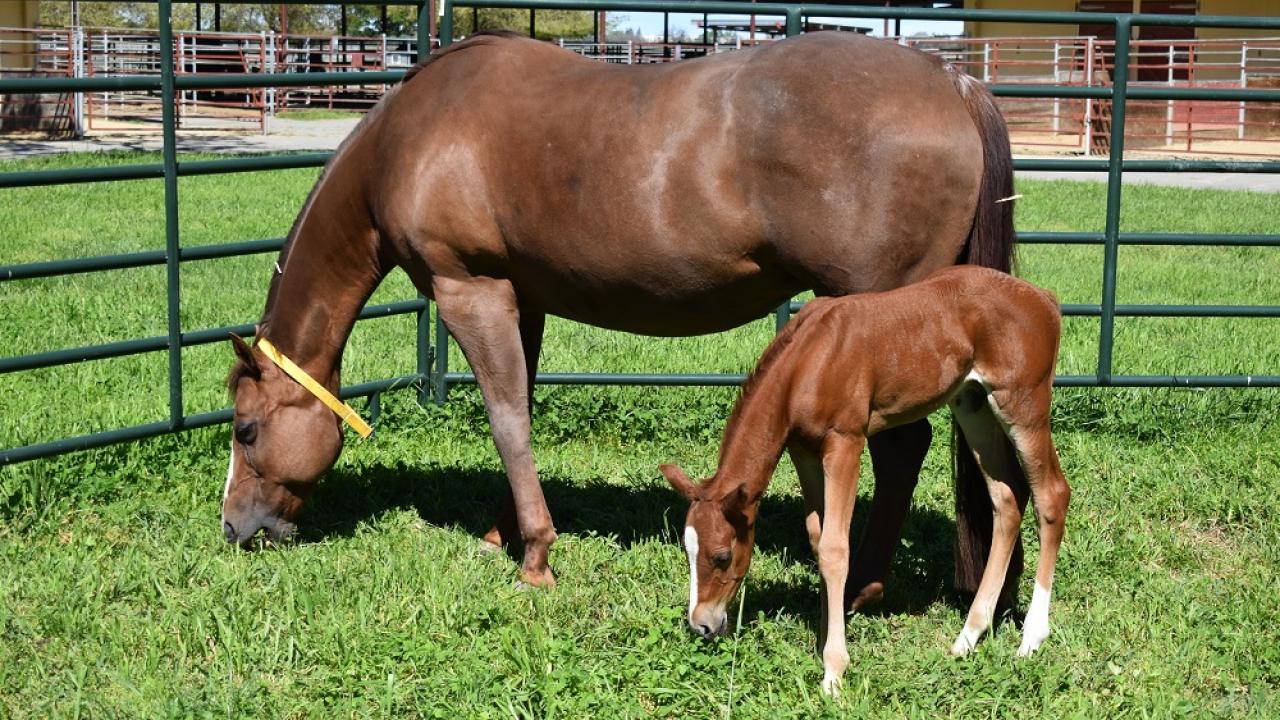 We are all familiar with the phrase “you are what you eat.” In fact, the food that you eat influences the population of microorganisms (bacteria and viruses) in your gut, collectively referred to as the gut microbiota. Research has shown that the composition of gut microbiota changes over time as we age and alterations can influence health, for better or worse. In humans, gut microbiota go through some characteristic changes as we move from birth into our first year of life. A recent study supported by the UC Davis Center for Equine Health, led by Dr. Michael Mienaltowski of the UC Davis Department of Animal Science, reported that this is true for horses as well. Since there are many risks to the well-being of a newborn foal’s gastrointestinal (GI) system, being able to track and assess gut health could help optimize foal care from birth through weaning.

Just like human infants, foals need properly established gut microbiota in order to develop correctly and be healthy in their first years of life. Microorganisms associated with contact with the mare and consumption of colostrum and milk are the first to colonize a foal’s GI system. As the foal’s diet shifts from milk to solid food, so do the bacterial populations of the gut microbiota, enabling the foal to better obtain energy and nutrients from the new feed sources. Disruptions to the microbiota, such as those that occur with diarrhea, can negatively affect foal health.

The research team hypothesized that analysis of fecal samples from foals would be able to detect differences in gut establishment by age, changes in diet (from milk to grain, forage, and pasture), and diarrhea status. The study, published in the journal PLOS ONE, used next generation sequencing to analyze the bacterial populations of fecal samples from three different farm locations. They found that the composition of bacterial populations in the foals followed an age-dependent pattern linked to changes in diet. They also identified differences in microbial population patterns between healthy foals and those with diarrhea, as well as differences associated with management styles at individual facilities.

Samples from foals during the first week of life showed a high abundance of Proteobacteria, which is the same group of bacteria that is dominant in the gut of newborn humans. Early in life, newborns have few natural immunological protections, so these particular bacteria are quick to flourish. Protective features in milk then begin to help the gut microflora transition to a more stable, healthy population of useful microbes. From day seven through weaning, the study population shifted to an abundance of Firmicutes, which is the most abundant bacterial phylum seen in horses overall. In humans, this shift to a high abundance of Firmicutes also occurs as time after birth increases.

Horses and human babies are actually very similar early in life as they both “gum” and taste things in their environments. As they approach weaning, horses diverge from humans with regard to microbial function for nutrition. As foals in the study were progressively exposed to solid foods, first playing with, and then ultimately consuming the mare’s diet, the abundance of Bacteroidetes also began to rise because there was a new nutrient source entering the gut. At the same time, environmental factors, including pathogens, were potentially introduced, resulting in changes in the microbiota. Samples from foals with diarrhea showed an increased abundance of Enterobacteriaceae, a family of bacteria that includes Salmonella and E. coli.

From here, the researchers hope to move to examining how specific management changes might improve a horse’s gut microbiota. The hope is that someday veterinarians could suggest formulations of probiotics or be able to screen for optimal gut microorganisms from healthy animals for transfer to sick animals (transfaunation). Further research could enable veterinarians to visit a farm that has horses with diarrhea and not just treat the horses, but combine genomics and epidemiology to troubleshoot a management issue on the farm to eliminate diarrhea completely, thus saving time, money, and improving equine welfare.

In addition to uncovering useful information about the transition of foal gut microbiota in the early stages of life, this research was also unique in that it had a high level of student involvement, with four undergraduate and two graduate students contributing to the published study. The lead author was an undergraduate student in the Mienaltowski lab where he has now moved on to working as a technical assistant as well as working in a laboratory in the veterinary school. “By giving these undergraduate students a specific question or two to answer, they feel invested, but not overwhelmed,” said Mienaltowski. “They work together; learn teamwork, when to be a leader and when to be a supporter, all of which are important for careers in science, veterinary medicine, and equine operations management, which is where all of these students are heading.”

This study was supported in part by a grant from the UC Davis Center for Equine Health, which administers an annual grant program for equine researchers at UC Davis. “I am so grateful to the Center for Equine Health for funding,” Mienaltowski acknowledges. “It means a great deal to have the center’s support. I work hard to make every dollar count so that I can do the most work, solve many problems or answer many questions, and involve many enthusiastic students in the scientific method.”