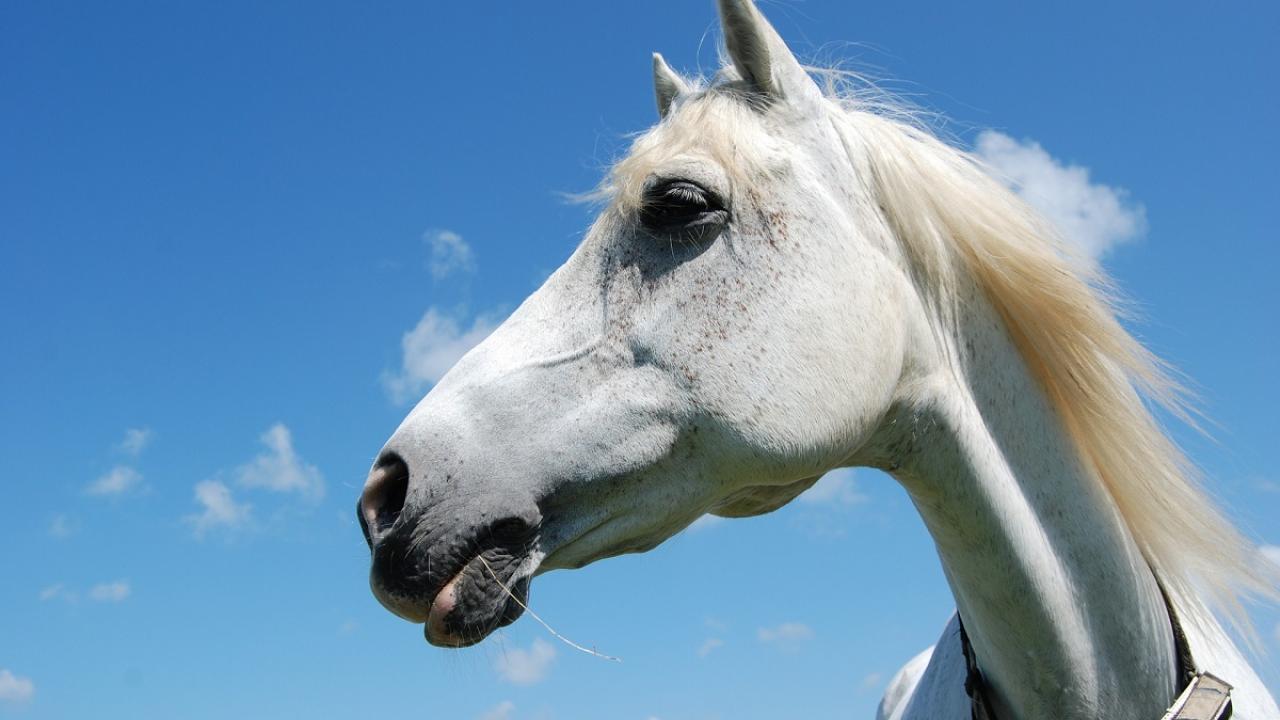 Strangles is a highly contagious disease of the equine upper respiratory tract caused by the bacterium Streptococcus equi subspecies equi (S. equi). The bacteria cross mucous membranes in the nose and mouth to infect lymph nodes where they cause abscesses that can eventually rupture. The infected lymph nodes become swollen, which can compress the upper respiratory tract (hence, the name strangles).

The disease occurs worldwide and is the most common infectious agent identified in horses 6 to 10 years of age. Horses become infected through inhalation or ingestion of the bacterium. This can occur through horse-to-horse contact, drinking contaminated water, or making contact with infected material or equipment. Disease severity varies and is dependent upon the horse’s immune status and the dose and strain of the bacteria. Younger horses often exhibit more severe clinical signs, whereas older horses are less severely affected.

Cases of uncomplicated strangles often recover fully. When complications occur (which happens in 10% of cases overall), the disease can have a mortality rate of up to 40%. Some horses become carriers that appear healthy but harbor S. equi bacteria in the guttural pouches. These carriers can intermittently shed the bacteria, creating a reservoir of chronically infected animals that perpetuate the disease in the population.

What are the clinical signs of strangles?

The incubation period for strangles is 3 to 8 days, at which point clinical signs, including lethargy, anorexia, fever, nasal discharge, and swollen lymph nodes with abscess formation may appear. Abrupt onset of fever (>103oF) is usually the first sign of the disease, occurring 2-3 days after infection, followed by nasal discharge several days later. Swollen, painful lymph nodes appear approximately one week after infection.

As the lymph nodes enlarge, they can cause respiratory obstruction as evidenced by labored breathing and difficulty swallowing, which can result in a loss of appetite. Lymph node abscesses may rupture between seven days and four weeks after infection and typically drain through the skin or into the guttural pouches. Complications of the disease can include metastatic strangles (“bastard strangles”) in which abscesses occur in other lymph nodes of the body, with reported cases including the brain, abdomen, and mammary gland.

Horses that are older and previously exposed generally have a milder form of strangles limited to upper respiratory signs, minimal to no lymph node abscesses, and a relatively fast recovery.

How is strangles diagnosed?

The sensitivity and specificity of diagnostic testing depends on several factors, including the stage of infection, sampling location and technique, and type of testing. Samples from the upper respiratory tract are obtained with nasal swabs, nasal washes, guttural pouch washes, or needle aspirate from an abscessed lymph node.

Microbial culture can be used to detect S. equi in these samples. Testing takes approximately 1 to 2 days and is low cost and widely available. However, successful detection may be limited during early phases of infection.  Quantitative polymerase chain reaction (qPCR) is faster (results may be available on the same day) and more sensitive, but does not distinguish between live and dead bacteria, so a positive result does not necessarily correlate with an active infection.

In complicated cases, an endoscopy of the upper respiratory tract may be required, as well as ultrasound and radiographs to identify the location and extent of abscesses.

How is strangles treated?

In most cases, strangles is treated with rest and supportive care. Horses are monitored closely to ensure pain management and adequate consumption of food and water. If not treated with antibiotics, 75% of horses mount a sufficient immune response to develop long-term immunity to strangles.

Antibiotics may be beneficial immediately after the onset of fever, prevent the formation of abscesses, and relieve airway obstruction, but their use is controversial because horses can have an altered post-infection immune response, which may leave them at risk for re-infection. Antibiotic treatment may include penicillin, ceftiofur, or ampicillin. The appropriate use of antibiotics may shorten the course of the disease and prevent complications.

Horses that develop lymph node abscesses may require hot packing or topical ichthammol treatment and flushing of the abscesses with povidone-iodine solution once they have opened. Nonsteroidal anti-inflammatory drugs (NSAIDs) may be used to decrease swelling and encourage eating.

Affected horses should be quarantined and all movement of horses on and off the property halted until all horses that had contact with the infected horse are confirmed to be negative.

Tracheostomy, a surgical opening through the neck into the windpipe, may be required in severe cases of respiratory distress.

Nasal shedding of the bacteria can persist for up to three weeks and horses may be infectious for at least six weeks after nasal discharge has stopped. Horses are considered disease-free based on guttural pouch sampling and endoscopy to visually assess the area for abscesses.

What is the prognosis for strangles?

The prognosis for full recovery of uncomplicated cases of strangles is good, but usually takes 3 to 6 weeks. Approximately 70-75% of infected horses go on to develop an immunity to S. equi that can last for at least five years.

How can strangles be prevented?

The course of S. equi infection allows for bacterial shedding to occur before abscesses appear, and perhaps even before the onset of fever. This means that S. equi can be widely distributed by the time clinical disease is observed. Susceptibility to strangles depends on exposure, the host’s immune status, and the virulence of the bacterial strain. Risks for exposure to strangles include a large population size that may lead to overcrowding, frequent travel, severe weather, interaction with horses from different areas, lack of vaccination, concurrent illness, and improper nutrition.

The best strategy to prevent strangles is to minimize exposure risks. Horses that are newly introduced onto a farm should be observed and temperature monitored twice a day for at least two weeks before being housed with resident horses. Horses with temperatures over 101.5oF should be isolated. Vaccination is recommended on farms where strangles is a persistent problem or there is a high risk of exposure.

When cases of strangles occur, any organic material that infected horses came into contact with should be removed from the property. Contaminated equipment and facilities should be properly cleaned and disinfected. Handlers should wash and sanitize hands before contact with individual horses and should work with sick horses after work with healthy horses has been completed for the day. Pastures and stables that contained infected horses should be rested for 4 to 6 weeks.