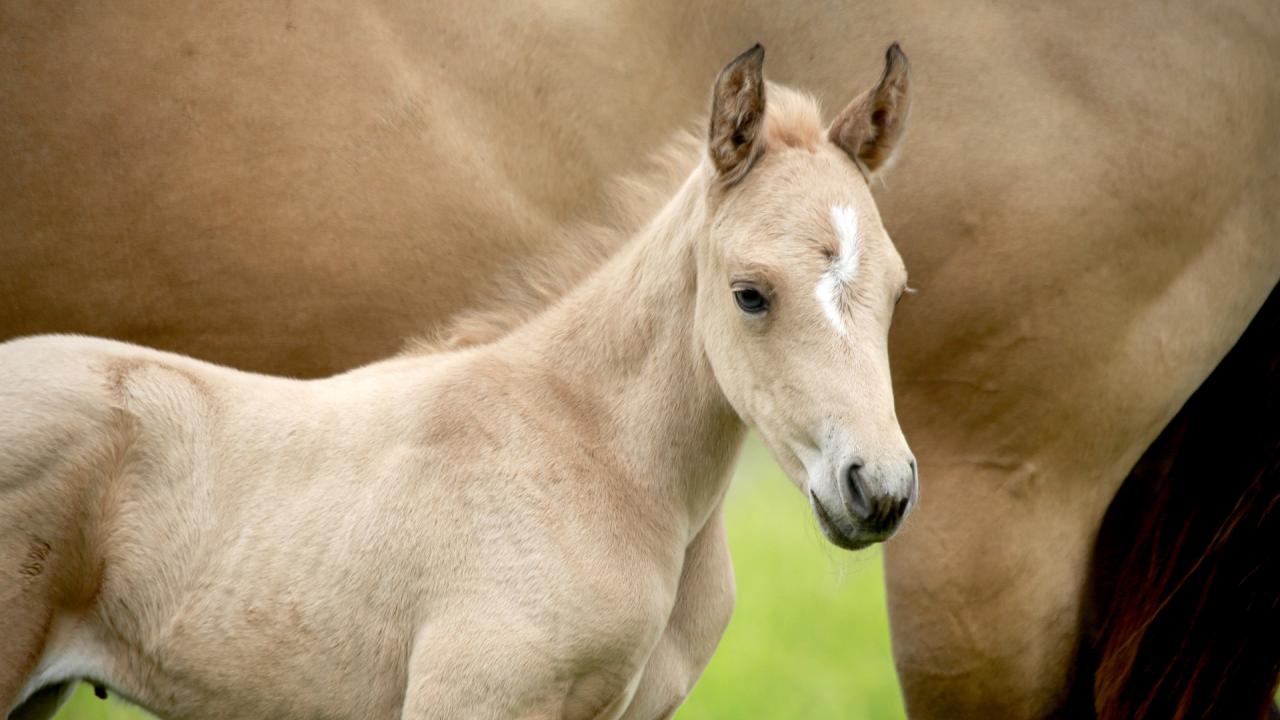 What is neonatal maladjustment syndrome?

Foals that are affected with neonatal maladjustment syndrome (NMS), also known as “dummy foals”, appear healthy when they are born, but shortly thereafter exhibit neurological abnormalities. They are often detached, disoriented, unresponsive, confused, and have trouble nursing. This is in contrast to unaffected foals who are active one to two hours after birth, stay close to the mare and nurse within three hours (video). Affected foals can have metabolic problems, including failure of thermoregulation, gut motility, and reduced ventilation. Early work in England determined the disorder is associated with human interventions or rapid birth deliveries. The cause of the abnormal behavior was unknown but believed to be birth low oxygen levels affecting the brain. However, no expected long term brain injury is seen in 80% of the foals that recover with intensive care. The discovery of very high levels of neurosteroid hormones in the blood of affected foals and the ability to reproduce the syndrome experimentally by infusion of a neurosteroid led to new thinking about a way to reverse the syndrome by birth canal pressure signaling via the squeeze procedure.

Neonatal maladjustment syndrome affects 1-2% of foals. These foals are difficult to manage and may not survive without significant intervention. Early diagnosis and intensive treatment, including around-the-clock feedings, intravenous (IV) fluids, and plasma administration for up to ten days can be successful, but is expensive and time-consuming.

Other causes that lead to weak newborn foals should be ruled out. It may be necessary to consult with a veterinarian to determine the cause and most appropriate treatment for a weak foal.

What is the “Madigan Squeeze Technique”?

The “Madigan Squeeze Technique” (MST), or “Madigan thoracic squeeze”, is an approach developed by UC Davis veterinarian and equine neonatal expert Dr. John Madigan to treat “dummy foals”. Madigan postulates that the journey through the birth canal activates a biochemical switch that enables newborns to transition from a calm, sedative state in the womb to alert consciousness - an essential early life step for prey species whose survival depends on being alert and mobile shortly after birth. In cases where this physical transition does not occur, the newborn remains in the quiet state they experienced in the womb. The MST acts to simulate the physical pressure of the birth canal and “activate the switch” to an alert state. Experimental studies at the UC Davis Center for Equine Health using the squeeze technic in normal foals revealed significant brain wave changes during the squeeze procedure and alterations in hormone levels.

This procedure should only be performed by skilled handlers after the newborn has been determined to not be experiencing respiratory issues, neuromuscular disease (such as botulism), or broken ribs.

Videos of Dr. Madigan performing the procedure are available here and and here.

What is the prognosis for foals affected with neonatal maladjustment syndrome?