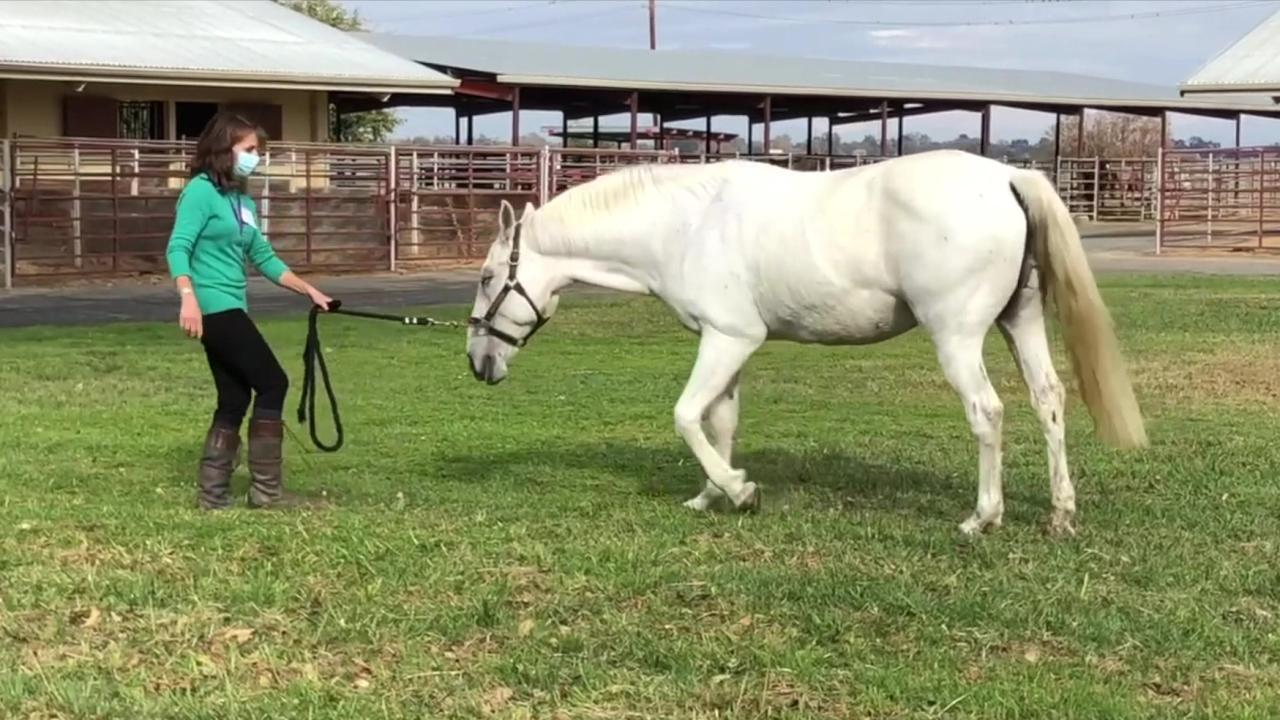 Sleep is important for overall health. Sleep disorders have been reported in many mammalian species, but are generally rare and not well understood.

Narcolepsy is a rapid eye movement (REM) sleep disorder. It results in excessive sleepiness during the day and “attacks” of sleep that are accompanied by rapid eye movements. These episodes often occur during periods of inactivity. Affected animals may also exhibit a temporary lack of muscle tone and reflexes (cataplexy) that can be caused by stimuli such as sounds, feeding time, saddling, leading, and other environmental triggers.

Narcolepsy in horses is broadly categorized into two groups: onset at birth or within a few weeks of age, and adult onset.

In horses, narcolepsy appears to be breed specific, with familial narcolepsy reported in Lipizzaners, Miniature Horses, Shetland ponies, and Suffolks. Sporadic cases have also been noted in other breeds. Horses with pituitary pars intermedia dysfunction (PPID) have been reported to exhibit narcolepsy-like episodes. The exact cause of narcolepsy in horses is unknown.

What are the clinical signs of narcolepsy?

Clinical signs of narcolepsy can range from lowering of the head to buckling of the knees and sometimes sudden collapse. Affected horses may be observed to frequently rest their heads or hindquarters on fences or other objects. They may exhibit swaying and frequent stumbling.

How is narcolepsy diagnosed?

Narcolepsy can be challenging to diagnose and there are currently no established criteria for definitive diagnosis. Cataplexy is the best diagnostic criteria for narcolepsy, but narcolepsy can also occur without cataplexy. The administration of drugs such as atropine and physostigmine salicylate can induce narcoleptic episodes in affected horses. However, this is not a definitive test. Video monitoring, accurate records of the horse’s sleep behavior, and evidence of wounds on the fetlocks, knees, and face, can aid in diagnosis.

Affected horses may show decreased levels of the hormone hypocretin-1 in samples of cerebrospinal fluid (CSF). Hypocretins are produced in the hypothalamus of the brain and have important roles in regulating sleep and wakefulness. Low levels of hypocretin-1 in the CSF are characteristic of sporadic (non-familial) cases of narcolepsy in humans and dogs, but this has not been established in horses.

Other neurologic conditions, musculoskeletal, metabolic, respiratory and cardiovascular causes, and sleep deprivation should be ruled out. This usually requires a physical examination, along with laboratory tests based on the clinical signs and patient history.

How is narcolepsy treated?

The antidepressant drug imipramine may be given orally or by injection to treat narcolepsy. Reported results are variable and adverse effects can occur.

What is the prognosis for narcolepsy?

The prognosis for narcolepsy varies. Horses usually regain control within minutes of an attack, but those that collapse frequently can suffer from knee, head, and face trauma. There are safety and welfare implications for horses that exhibit repeated collapse. There is no cure for narcolepsy.

How can narcolepsy be prevented?

Since the underlying cause of narcolepsy is unknown, preventative measures have not been defined. Inherited components have been proposed in some breeds, so affected horses should not be bred.

It is important to note that narcolepsy is actually quite uncommon in horses. Episodes that look like narcolepsy are generally more likely to be the result of sleep deprivation due to pain that inhibits the horse from lying down, excessive light or sounds that keep the horse from getting adequate sleep, and other similar environmental causes.