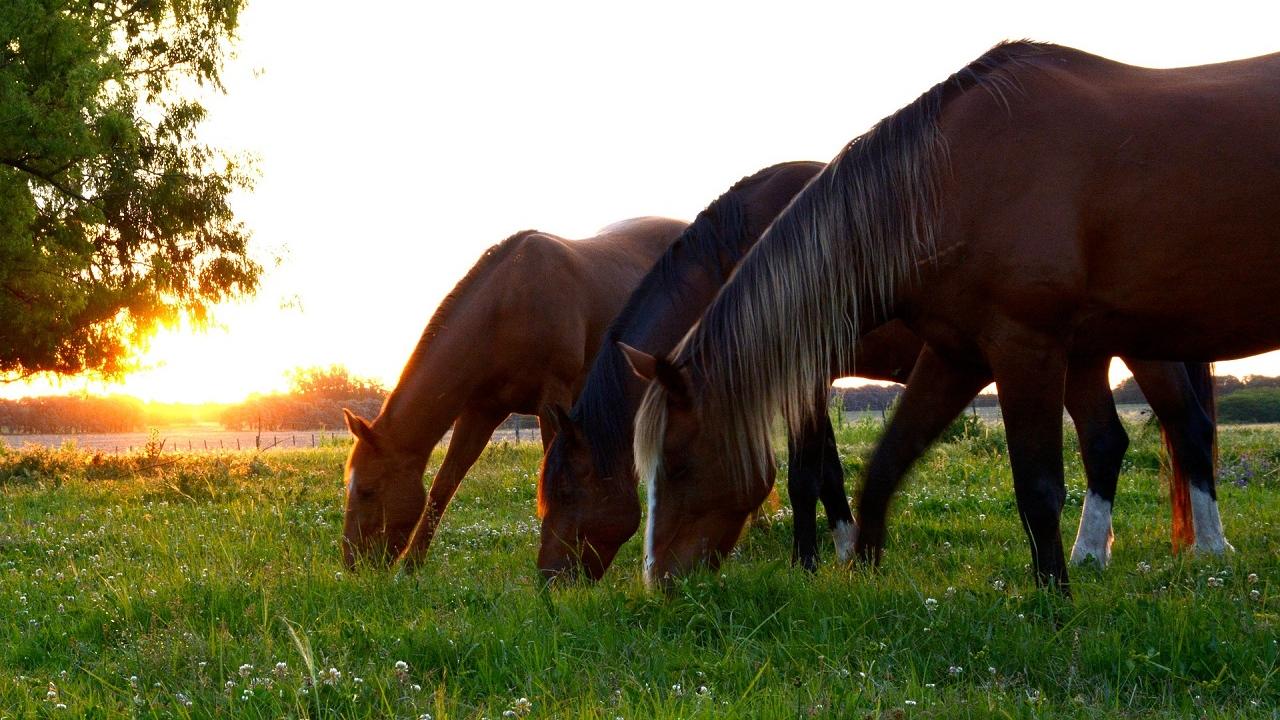 What is equine protozoal myeloencephalitis?

Equine protozoal myeloencephalitis is caused by infection of the central nervous system with the protozoan parasites Sarcocystis neurona and, less commonly, Neospora hughesi. It is often a progressively debilitating disease and can affect any part of the nervous system, from the front of the cerebrum to the end of the spinal cord.

Equine protozoal myeloencephalitis is considered the most prevalent cause of neurologic disease of horses in the Americas. The range of the opossum, the definitive host of S. neurona, defines the geographic range of clinical EPM in horses. In areas where the opossum is common, approximately 50% of horses are seropositive (have antibodies to the parasite in the blood), indicating exposure to the organism. Opossums shed the infective sporocysts (egg-like stages of development) in their feces. Horses become infected by ingesting food or water that has been contaminated with opossum feces containing the infective sporocysts. In <1% of cases, the sporocysts ingested by a horse migrate from the intestinal tract into the bloodstream and cross the blood/brain barrier, causing disease by attacking the horse’s central nervous system. S. neurona cannot be transmitted from one horse to another.

A few cases of EPM are associated with N. hughesi, another protozoal parasite. The life cycle, natural host(s), and modes of transmission of this organism are poorly understood. Affected horses may not show any clinical signs, or may show clinical signs consistent with those caused by S. neurona. Infection with N. hughesi has also been associated with abortions and neuromuscular disease. Transmission from N. hughesi-infected broodmares to their offspring has been reported, but not all offspring developed neurologic signs.

Although clusters of cases have been noted, EPM usually occurs sporadically and often only involves one horse on a given property. Cases occur in horses of all ages, with greater frequently in young athletes, and no sex or seasonal biases have been observed.

What are the clinical signs of EPM?

Clinical signs due to S. neurona infection are dependent on the area of the central nervous system that contains the parasite and the type of damage caused. The onset of the disease may be slow or sudden. Spinal cord involvement can manifest in gait abnormalities, incoordination, ataxia (inability to control voluntary muscle movement), spasticity in all four limbs, and muscle atrophy, whereas brainstem involvement may manifest in lethargy, behavioral changes, and cranial nerve paralysis (facial nerve paralysis, tongue paralysis, difficulty swallowing). Signs may not be the same on both sides of the horse (asymmetrical). Some horses may stand with their feet splayed or lean against walls or other supports. In some cases, the clinical signs stabilize and then relapse days to weeks later. Factors that influence the progression to severe neurologic disease are not well understood.

Cases of EPM due to N. hughesi can have a wide range of clinical signs, including hind limb ataxia and hind limb weakness that progress to more generalized weakness and recumbency. Clinicians at UC Davis have mainly noticed gait abnormalities and ataxia, and that cases diagnosed with EPM due to neosporosis often have concurrent diseases (metabolic conditions, bacterial or viral infections).

How is EPM diagnosed?

Definitive diagnosis of EPM relies on postmortem examination of neural tissue. No test in the live horse is currently considered definitive. Therefore, EPM is diagnosed based on a combination of (1) a thorough neurologic examination, (2) evaluation of serum and/or cerebrospinal fluid (CSF) for the presence of antibodies to S. neurona and/or N. hughesi, and (3) the elimination of other neurological disorders.

Diagnostic tests look for the presence of antibodies to the EPM protozoal parasites in serum and/or CSF. A positive blood test only determines that the horse has been exposed to the parasite and does not mean that the horse will develop clinical signs or that the neurological deficits are caused by the protozoal parasite. There is currently no gold standard for EPM diagnostic testing other than necropsy.

Western immunoblot test (WB) – based on the detection of S. neurona-specific antibodies in the blood and/or cerebrospinal fluid (CSF). This test is good at ruling out EPM caused by sarcocysts in horses when the prevalence of infection is low or moderate. Although it detects the presence of S. neurona-specific antibodies in the serum or CSF, approximately 30% to 60% of clinically normal horses in many parts of the United States have antibodies to S. neurona without having EPM. Additionally, contamination of cerebrospinal fluid with even minute quantities of peripheral blood can produce a false positive result if the horse has antibodies in the blood.

Indirect fluorescent antibody test (IFAT) – provides a quantitative result so that the titer is associated with a calculated probability of disease. The SarcoFluor® IFAT is used to diagnose S. neurona antibodies and the NeoFluor® IFAT detects antibodies to N. hughesi. The SarcoFluor® test offers increased sensitivity and specificity for identifying infected horses compared with the Western immunoblot test. Results are truly quantitative, thereby allowing improved interpretation of the likelihood of active EPM infection and disease rather than simply an indication of exposure. The higher the IFAT antibody titer, the more likely that EPM is the cause of the horse’s neurologic signs. These tests are less sensitive to blood contamination of CSF, resulting in fewer false-positive results, and they are faster, less labor-intensive, and less expensive than the Western immunoblot test. Increased accuracy towards supporting a diagnosis of EPM should include the testing of CSF for specific antibodies to S. neurona and/or N. hughesi. A positive result often indicates the production of intrathecal (the space in the spinal canal that holds the CSF) antibodies and supports the clinical diagnosis of EPM.

ELISAs – SAG ELISAs are quantitative tests of S. neurona surface antigens, which are highly expressed in the parasite. Some of these tests are based on antigens that are not expressed by all strains of S. neurona, limiting their usefulness for EPM diagnosis. Although several studies have compared some of these newer tests to WB and IFAT, they have not all been evaluated. An ELISA test for a N. hughesi surface antigen is available but has not been validated for EPM diagnosis due to the small number of known EPM cases caused by this parasite. Greater accuracy of the ELISAs has been determined by using CSF or calculating a serum to CSF ratio, indicating intrathecally derived antibodies to the specific parasites.

How is EPM treated?

Treatment to control infection should include an FDA-approved anticoccidial drug (Ponazuril, Diclazuril, Sulfadiazine/Pyrimethamine). Additional treatments should be provided as needed based on the severity of the clinical signs and any associated complications. NSAIDs (i.e. phenylbutazone or banamine) may be given to moderately to severely affected horses during the first week of antiprotozoal treatment in an effort to prevent worsening of neurological deficits. In diagnosed horses that show brain involvement, or are in danger of falling, a short course of corticosteroids and dimethyl sulfoxide may reduce the inflammatory response. Vitamin E is sometimes used as an antioxidant treatment in infected horses, but the benefits of this practice, if any, have yet to be established experimentally. Length of treatment depends on the duration and resolution of the clinical signs. Duration of treatment for the FDA approved products is approximately one month, although some products may require treatment for 3-9 months. Treatment duration is mostly dependent on the clinical improvement (i.e. treat as long as there is improvement noted). Because of safety and efficacy concerns, compounded antiprotozoal drugs should not be used in horses with suspected EPM.

What is the prognosis for EPM?

If left undiagnosed and untreated, EPM can cause devastating and lasting neurological deficits. The success rate for treated horses is high. Many will improve and a smaller percentage will recover completely, but 10-20% of cases may relapse within two years. A prompt, accurate diagnosis is important and treatment should be started immediately to maximize the chance for recovery.

How can EPM be prevented?

All horses are susceptible to EPM, but not all infected horses develop the disease. Preventative approaches include decreasing stress and reducing exposure to opossum feces. Measures such as feeding horses in feeders and not on the ground, maintaining separate fresh water sources, preventing wildlife access to areas where horses are housed, properly disposing of animal carcasses, keeping feed rooms and containers closed and cleaning up dropped grain can help reduce protozoal infections. There is currently no vaccine for EPM.