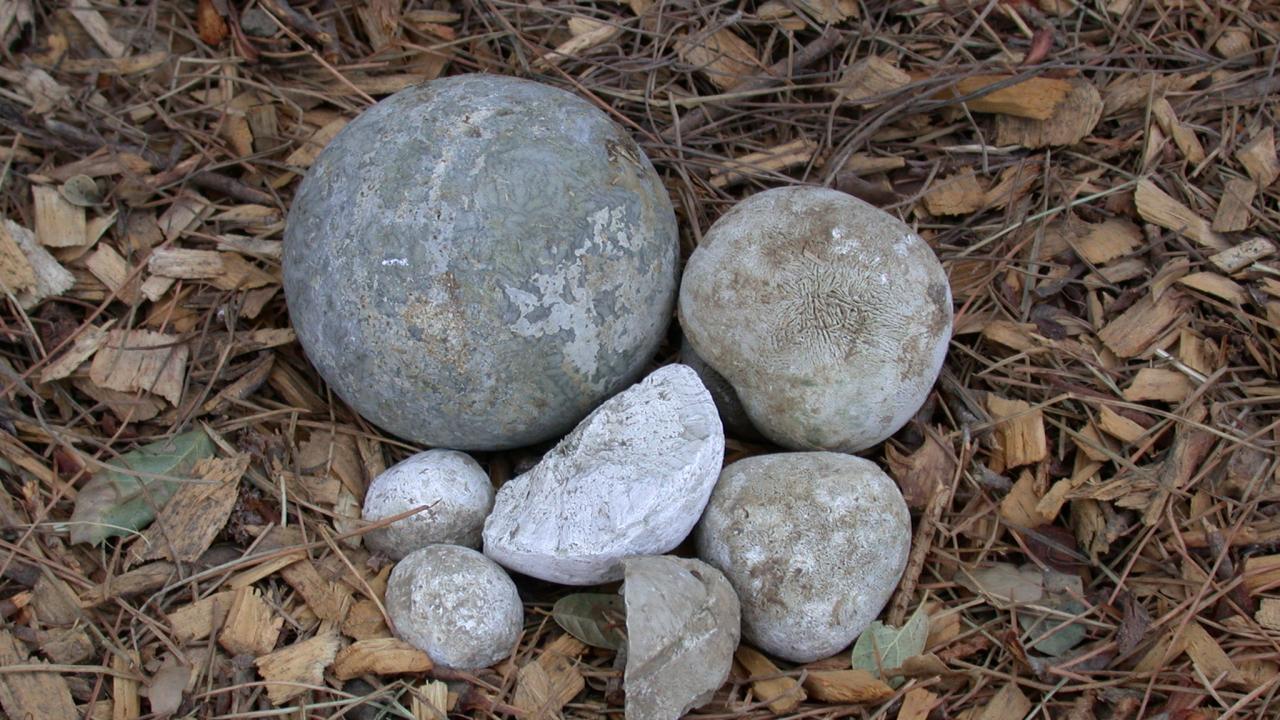 Enteroliths are mineral accumulations of magnesium-ammonium-phosphate (struvite) around a foreign object (a piece of metal, pebble, bailing twine, hair, rubber) that form round, triangular, or flat stones inside the bowel usually over the course of multiple years. They form in the large colon of horses where they can remain for some time until they move and cause an obstruction in the large or small colon, resulting in colic.

Enteroliths form as a result of certain diets (for example, feeding diets high in magnesium and protein, such as alfalfa-rich diets), breed predisposition, and/or management practices. The rate of enterolith formation is variable and thought to be affected by gut pH, the availability of certain minerals, and gut motility. Enteroliths can vary in size, and horses may carry one or two large ones, or 100 or more small ones, in their guts. Why some horses develop enteroliths and others do not, as well as why some horses develop many stones whereas others develop only one or two, is not well understood. Small enteroliths may harmlessly pass out of the body with manure, whereas large stones can create obstructions and result in colic. Many horses can carry large enteroliths for years with no issues.

Enterolithiasis is reported worldwide, but is more common in certain geographic regions, particularly California and Florida.  It also occurs in all breeds, but some, including Arabians and Arabian crosses, Morgans, and American Saddlebreds, seem to be overrepresented. There does not appear to be any sex predilection and enteroliths are very rare in horses under 2 years of age.

What are the clinical signs of enteroliths?

Clinical signs vary depending on the size and number of enteroliths and the part of the bowel where they are located. Horses with a single large enterolith in the large colon may have a history of chronic, intermittent colic. Horses with smaller-size stones that can move and lodge within the small colon will have signs of colic that are more acute. Some horses have a history of passing stones in the feces without showing signs of colic. Nonspecific signs, such as changes in attitude, anorexia, lethargy, weight loss, loose manure, girthiness, and reluctance to exercise may appear prior to any signs of colic. Signs indicating mild to moderate abdominal discomfort include pawing, repeatedly lying down and getting up, rolling, looking at the flank, kicking at the abdomen, and sweating.

How are enteroliths diagnosed?

Diagnosing enteroliths can be challenging, as many of the initial outward signs are not specific. Finding stones in a stall or paddock is a good indicator, but these can be easily missed or hard to attribute to a single horse in a group-housing situation. Radiographs (x-rays) are the best screening test for enteroliths, although radiographs are not able to identify the presence of enteroliths in every case.  The ability of radiographs to confirm the presence of stones depends on the size of the horse, contents of feed inside the bowel, location of the enterolith (easier to detect in the large colon than the small colon) and the radiographic equipment used. In geographic areas where enteroliths are common, such as California, veterinarians may suspect intestinal stones in horses that have a history of colic. Early diagnosis is important because an enterolith obstructing the bowel has the potential to rupture with fatal consequences. Enteroliths that have flat edges or triangular shapes are indicators of the presence of more stones as they get these shapes by rubbing against each other in the gut.  If history and clinical signs are compatible with a diagnosis of enteroliths, surgery will provide a definitive diagnosis.

How are enteroliths treated?

The only successful treatment for horses with colic due to enteroliths is surgical removal. Horses are generally kept out of work for 3 months post-surgery. Horses that have had surgery to remove enteroliths should not have any alfalfa in their diets. Surgery is often successful and postoperative complications are uncommon, but recurrence is highly likely if recommended dietary changes are not followed.

What is the prognosis for enteroliths?

The prognosis for horses with enteroliths depends on the size of the stones, where they are located, and when they are detected. The prognosis for horses with very small enteroliths is good; they may remain asymptomatic and pass the enteroliths in their manure. For horses with larger enteroliths, full recovery is very likely if resulting impactions are identified before damage to the colon occurs. The biggest concern is when the intestine ruptures before detection and removal of the enteroliths; these cases are fatal. Enteroliths that are slightly larger than a fecal ball are the most concerning because they cause colic by completely obstructing the small colon, which is a site predisposed to intestinal rupture.  Early detection and the subsequent surgical removal of enteroliths has a high (>90%) success rate.

How can enteroliths be prevented?

Enteroliths can be managed by cutting down on alfalfa so that it makes up <50% of the diet, reducing or eliminating bran, adding apple cider vinegar to hay or grain daily, and increasing the grain ratio to decrease the pH level in the colon. Additional grazing, increasing the number of feedings per day and providing frequent, consistent exercise can help keep food material moving through the colon. Supplementing with psyllium, softening hard water, and avoiding mineral-rich feeds are additional management steps that can prevent the formation of enteroliths.