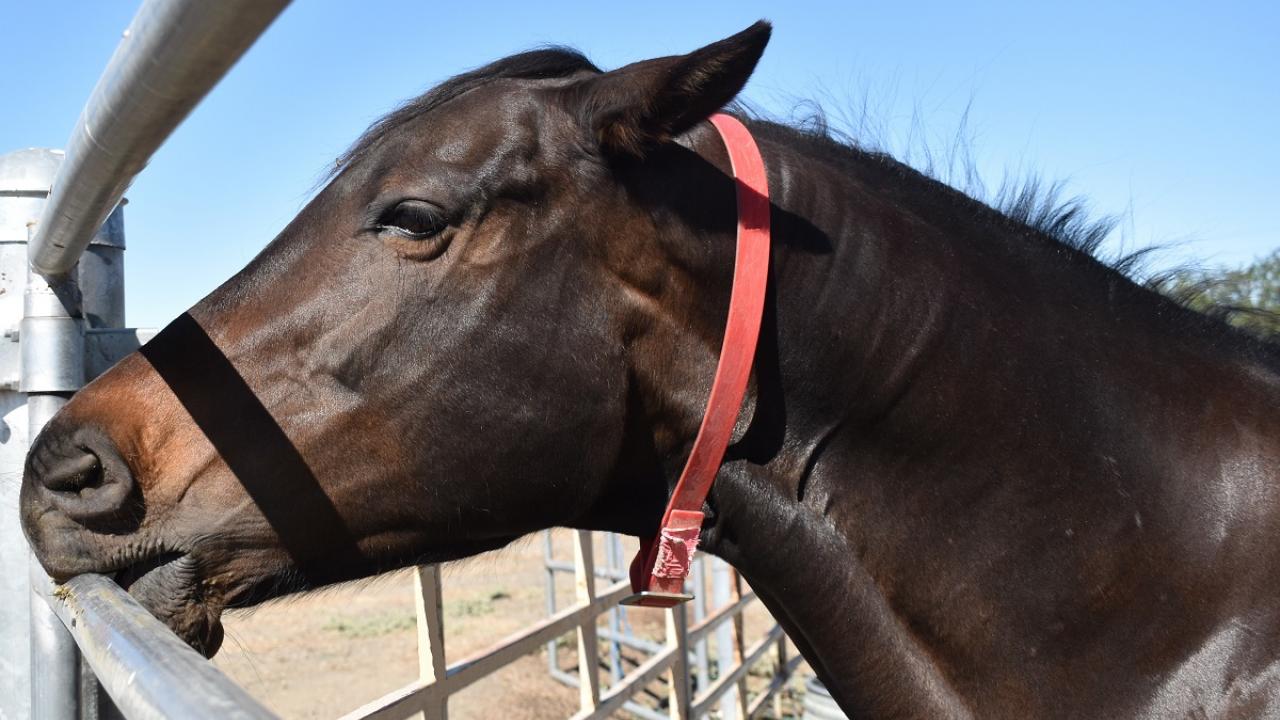 Cribbing, or crib-biting, is a stereotypy exhibited by some horses. Stereotypies are repetitive behaviors that lack an apparent goal or function, often induced by stress, frustration, and/or dysfunction of the central nervous system. Cribbing involves the horse grasping a fixed object, such as a fence, stall door, bucket, or feeder, with its front teeth (incisors), contracting the neck muscles and pulling back, usually producing a characteristic audible grunting sound. Despite appearances, horses don’t actually swallow much air when they perform this behavior.

The behavior has been well documented in domesticated horses, with an estimated 5-15% prevalence. Cribbing has also been reported in some captive wild horses, such as the Przewalski horse, but has not been observed in wild, or feral, free-ranging horses. It is uncommon in donkeys and mules.

Horses that crib have been reported to exhibit weight loss and overall poor condition, abnormal development of muscles in the neck, and excessive wear on their teeth. Cribbing can interrupt their daily routine, occupying several hours per day. Links, but no causal relationships, have been made between cribbing and colic, specifically epiploic foramen entrapment and colonic obstruction distension colic, as well as gastric ulcers. Cribbing has also been identified as a risk factor for temporohyoid osteoarthritis.

Cribbing is considered an undesirable stable vice and can result in a significant negative impact on the perceived monetary value of a horse. There is also stigma around the behavior that can result in refusal to board the horse at some facilities. Horses that crib may cause significant damage to trees, fences, walls, and other surfaces.

Horses that crib have been shown to have higher levels of the stress hormone cortisol than non-cribbers. They also exhibit higher levels of the “feel good” hormones endorphins, making it difficult to determine if horses crib to combat frustration, or if it is more of an addiction.

A number of causes have been suggested, and many investigated. Unfortunately, the reasons behind why horses crib remain frustratingly elusive. It is likely that multiple factors are responsible for the behavior. It has been linked to altered brain function, gastrointestinal irritation, feed consisting of too much concentrate and not enough forage, breed, sex of the horse, trauma associated with weaning, and housing in individual stalls without enough time spent outside the stable or in contact with other horses. Surveys and studies of owners and others who care for horses have reported the perceived main cause(s) of cribbing as boredom, stress, or habit.

An underlying genetic predisposition to cribbing has been suggested as some breeds, and even families, have exhibited a higher prevalence for stereotypies. The identification of genetic causes for compulsive behaviors in other species, such as flank sucking in Doberman pinschers, has advanced the field of behavioral genetics. However, to date the mode of inheritance for cribbing has not been established, and efforts to identify specific causal genetic factors, including investigations of leptin, ghrelin, and dopamine-receptor genes, have come up empty-handed.

There is also the seemingly age-old question of whether horses copy cribbing by watching or interacting with other horses. Studies to date have revealed conflicting data. It is possible that this is due to the fact that environmental factors act as important triggers, so it is difficult to separate exposure to common management factors, especially those demonstrated to be associated with cribbing, from other potential causes. It has been suggested that dominance and hierarchies between horses may influence learning by observation. There is currently no scientific evidence supporting isolation of cribbers from stable mates.

How is cribbing treated?

Cribbing behavior is difficult to stop once it has become established. Since the underlying cause(s) for the behavior is hard to establish and remedy, “treatments” are largely unable to affect the root of the problem. In some cases, the behavior becomes so deeply ingrained that it persists even after the primary cause has been removed or addressed.

Physical preventions for cribbing include the use of a cribbing collar, strap, or muzzle. It is important to ensure that these devices fit properly to avoid rubbing on the head and face. Removal of horizontal surfaces that horses might crib on, use of electric wire or fence, or the application of unpleasant tasting substances on surfaces are also common approaches. It has been suggested, though, that cribbing is a type of coping mechanism, so being prevented from performing the behavior may create more stress. Horses often exhibit more frequent cribbing activity when the restriction is removed. Blocking the behavior without providing an alternative outlet may result in frustration for the horse.

Surgical approaches have been developed as more permanent solutions to cribbing, with inconsistent rates of success. The modified Forssell’s procedure was developed to remove certain muscles in the neck, with variable success. Surgical placement of “crib rings”, small steel rings that are implanted into the horses’ gums between the upper teeth are reportedly effective at decreasing cribbing, but long-term effectiveness is uncertain as loss or damage of the rings leads to a return to the behavior. The application of these approaches has also raised welfare concerns.

Pharmacological treatments have reportedly been successful in treating stereotypic behaviors, but additional research on potential side effects and toxicity of specific agents is required. These pharmacological agents also must be administered regularly, which increases labor and costs.

Recommended management approaches, either alone or in combination with other treatment strategies, include increasing forage and reducing concentrate in the diet, providing more turnout time and increased social interaction.

Ultimately, a combination of approaches tailored to individual horses may be the most successful for addressing the behavior.

How can cribbing be prevented?

Since there is no consensus on what exactly causes cribbing, it is difficult to know what to do to prevent it. Prevention for some horses may not be fully possible. Importantly, underlying medical conditions such as gastric ulcers should be identified and treated. Efforts to provide a calm, low stress environment with increased turnout and forage intake may be beneficial. If possible, provide social contact with other horses. Reduce the amount of concentrate and/or sweet feed in the diet. In young horses, it is important to institute management changes as soon as the behavior is observed to prevent it from becoming a habit.